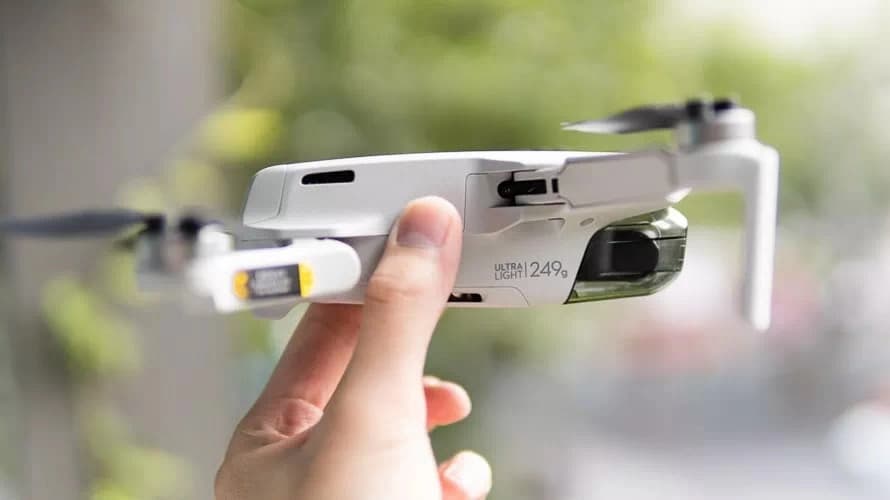 Buying a drone for a teenager is a daunting prospect. There are so many different choices, and there are a lot of things to consider. You want to get a quality product that will last without breaking the bank.

After extensive research, we think that the DJI Mini is the best drone for teenagers due to its capable camera, flight performance, intelligent flight modes, size, and price point.

The runner-up is the Ryze Tello and Holy Stone HS100.

The Potensic T25 if you’re on a particularly tight budget.

Without further ado, let’s discuss how we came to this decision.

Things We Considered in Choosing the Best Drone for a Teenager

There are several important considerations when selecting a drone for a teenager. Most of these involve safety. Teenage drone operators are likely new to the hobby, and as such, it’s crucial that their drone is equipped with adequate failsafe protocols.

There are also some feature factors to make sure the young pilot is getting a great product for the money.

Teenagers are not young kids, they may easily get bored flying a cheap toy drone that has limited features. They are likely to expect more from a drone than just flying for fun. So a drone that has plenty of intelligent features will probably hit the nail on the head.

Another important factor to consider when selecting a drone for teenagers is whether or not it has GPS lock capabilities. This allows the aircraft to stay stable in the air despite wind or other environmental conditions. Teenagers are likely novice drone pilots, so this feature is helpful for avoiding accidents from loss of control of the aircraft. Unless environmental factors are particularly bad, drones with GPS-lock will stay put and remain steady.

Another important thing to keep in mind is whether or not the drone has a return to home feature. This function makes the aircraft return to its designated home point on its own. This is a really important feature for less experienced pilots in case they lose control of the drone or need it to come back immediately.

Ease of use is a big factor to consider when buying a drone. Teenagers are novice pilots, so they need something that they can simply turn on and fly without jumping through too many hoops. Furthermore, the drone they get should be user-friendly in terms of the actual controls and manipulation of the aircraft.

When buying any drone, the camera’s capability is a big factor to consider. Teenagers, while still beginner pilots, may also want to take cool photos and videos with their drones. A poor camera not only means poor photos and videos but visual navigation will also be hindered when flying the drone using the camera’s live feed.

Size is another important factor we considered when making our decision. Teenage pilots that are less experienced should get used to flying smaller, lighter drones before moving to larger platforms. The smaller the safer.

The Mavic mini is packed with unique features that make it a higher-end small drone. It features a 3-axis gimbal with a 12-megapixel camera that shoots video in 2.7k. This drone has many features that make it an ideal beginner drone. It’s foldable and can be put right into your pocket. The 249g weight makes it a register-free drone in many countries.

This product is unique because it doesn’t fit in any one category. Kids learn to fly drones with this bird, yet its camera takes good enough photos for the real estate industry.

Please note that it’s safer to fly with propeller guards.

The Ryze Tello is another decent choice for teenagers. It really stands out for its camera, programmable features, and robust flight control powered by DJI.

Like every coin has two sides, users do have complaints about the drone.

The Holy Stone HS100 is a somewhat larger drone that has several features that make it a good drone for teenagers. It’s easy to fly, stable in the air, and the camera quality is more than adequate.

The Potensic T25 is similar to the Holy Stone HS100. The T25 handles great and shoots a fairly good video for its price point. It has a good flight time and some intelligent flight modes that make it more than a toy drone. This bird is even compatible with virtual reality goggles.

We’ve also done some research on the Eachine E511 and the Potensic D80. Both are good options, but due to their unique shortcomings, they didn’t quite make our list. Also, the DJI Spark had been our best choice since the Mavic Mini was released, but it’s now on our competition list because of the higher price and inferior flight performance compared to the Mavic mini.

Since the release of Mavic Mini, DJI has discontinued the DJI Spark.

The Potensic D80 is another drone that has a similar camera to the ones we’ve discussed. However, the D80’s camera isn’t adjustable at all, which means props will virtually always be in the shot.

In this article, we’ve discussed several contenders for the best drone for teenagers. After considering these particular drones and their features, the DJI Mini is the clear winner. It’s packed with excellent technology that’s still easy for the novice pilot to use.

The Mavic Mini simply outdoes every other product around its price point.

If you are looking for a more affordable drone for entertaining and education, then the Ryze Tello would be a better choice.