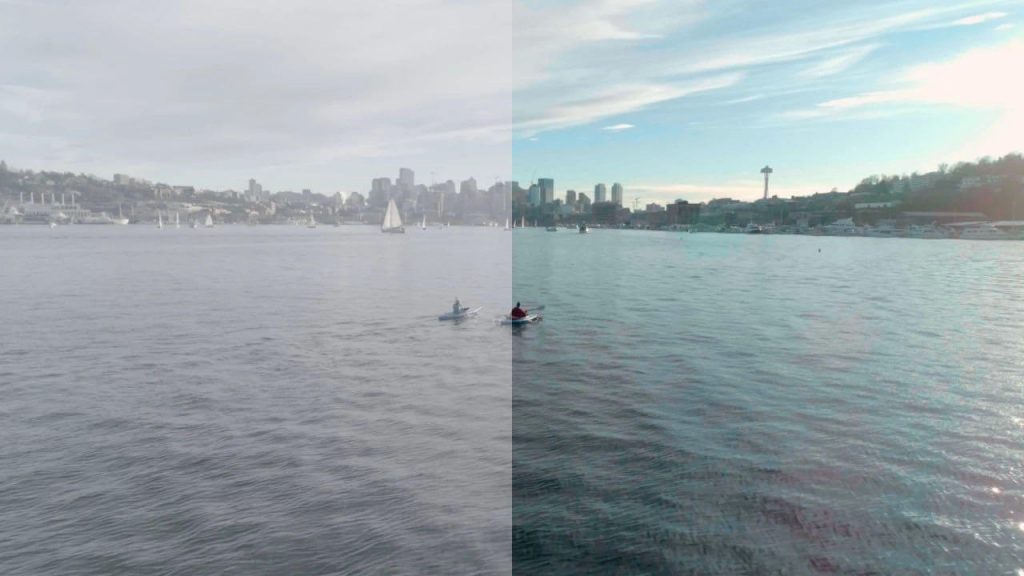 If you recently purchased a new higher-end consumer or professional drone, you’ve probably noticed that there are several mode options for shooting video, including D-Cinelike, D-log, and Normal. For the novice drone pilot and videographer, this jargon is intimidating and difficult to understand. For more seasoned aerial videographers, it can even be can be challenging to determine which mode is preferable.

In this guide, we will explain the difference between D-Cinelike, D-log, and Normal mode so that the next time you hit the skies with your drone, you can capture and share some amazing aerial footage.

D-Cinelike is a unique video color profile that DJI has created for some of its higher-end consumer and professional drones. This color profile captures a broad range of colors and is not quite as flat as other neutral color profiles, but it will still need to be color graded for the best results.

D-Cinelike preserves shadows, highlights, and mid-tones, which, after being color graded, makes the footage look great. 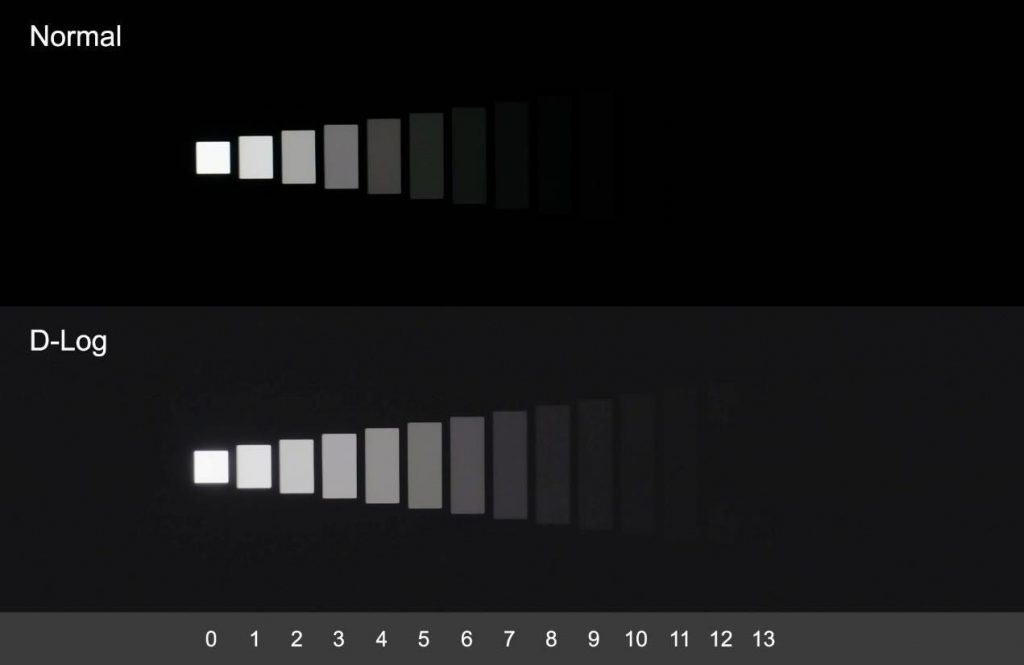 Much like D-Cinelike, raw footage shot in D-log will look strange right off the micro SD card. This is because, in order for D-log footage to really be presentable, it must be edited.

The raw footage captured in D-Cinelike and D-log will look similar. It will look flat and dull, and it will lack contrast and saturation. This is because both modes are intended to be used in conjunction with video editing software to bring out the color, contrast, and vibrancy of the footage.

The primary difference between D-Cinelike and D-log is that D-Cinelike captures a broader range of colors than D-log. The color range captured when shooting in D-log is significantly more compact. However, D-log helps capture more details in the highlights without making the shadows too dark.

What these two modes have in common is that they will both need to be color graded for the best results. Both modes are not intended to produce the end product right off of the micro SD card but rather capture a lot of detail that can be brought out with video editing software later.

The color grading process for D-Cinelike footage is fairly simple. In general, a few tweaks to the exposure and saturation of the footage will yield crisp, high-quality footage. 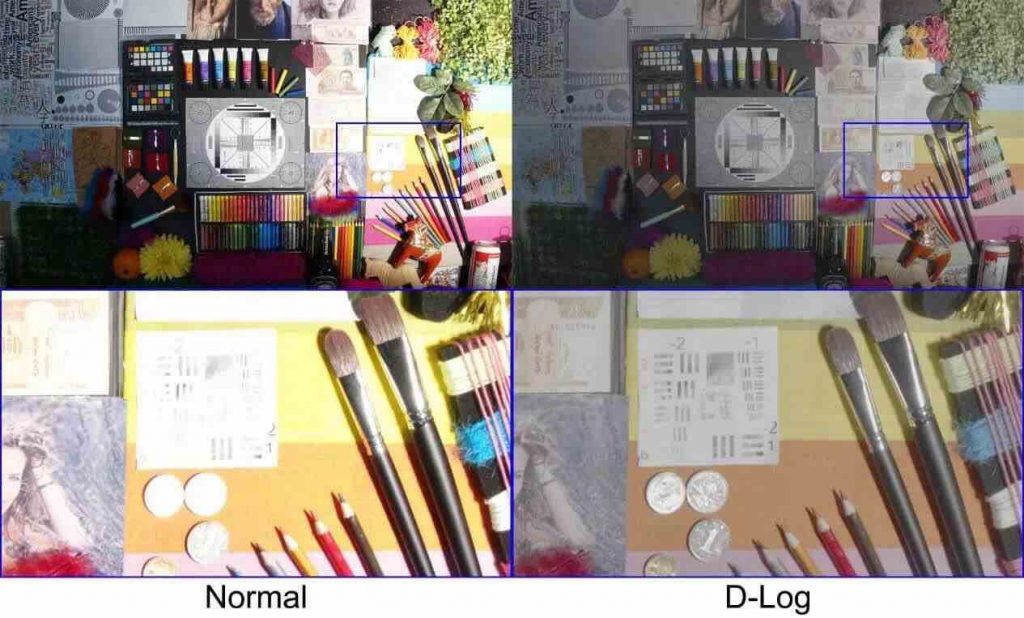 The color grading process for D-log footage might be slightly more involved. The footage will need exposure and saturation adjustments, but it also might need more in-depth color modification.

Depending on the post-processing software being used, there might be a selection of Lookup Tables, or LUTs, to choose from. In simple terms, LUTs are essentially preset color grading schemes that can be quickly applied to video footage to achieve the desired look. LUTs can make color grading footage shot in D-Cinelike or D-log extremely quick and simple.

So, which is preferable, D-Cinelike, or D-log? It ultimately depends on personal preference and the environment in which you are shooting. Neither mode is “better” per se. Experiment with shooting and color grading footage shot in both modes to get a better idea of which mode is optimal for different situations. You might just find that both modes are great for different situations.

Footage captured in the Normal color profile will look bright, saturated, and vibrant as soon as it is pulled from the drone’s micro SD card. When shooting in normal mode, the camera essentially processes the video for you and creates a good all-around end result.

Simply put, the Normal color profile is the best option for amateur drone pilots that want to capture some cool aerial footage without having to painstakingly color grade it for it to be presentable, which is the case with the other modes we have discussed.

However, the Normal color profile will lack the small details, contrast, and dynamic range that characterizes cinematic, professional video. D-Cinelike does a better job of preserving shadows, highlights, and mid-tones. After color grading, footage captured in D-Cinelike will look significantly better than footage captured in Normal mode.

Why Does Normal Mode Look Better Than D-Cinelike and D-log?

The Normal color profile looks better than D-Cinelike and D-log because the latter two modes are meant to establish a working base for post-production editing, whereas normal mode is meant to capture footage that requires little to no editing. In other words, D-Cinelike and D-log capture more visual information than the Normal color profile, but it must be extracted during post-production editing.

Some of the most popular drones on the market that support D-Cinelike are as follows:

Some of the most popular drones on the market that support D-log are as follows:

The three-color profiles we discussed all have their place in the world of drone videography. And thankfully, DJI’s higher-end drones are capable of shooting in all three modes, so each mode is right at your fingertips.

If you are an amateur videographer that wants to capture crisp aerial footage without having to edit it, Normal mode is the best option for you. Normal mode is ideal for aerial videographers that simply want to get some good looking footage of cool sights and share it as quickly as possible.

If you are looking to create professional cinematic video footage, shoot in D-Cinelike or D-log and edit the footage to truly bring it to life. This process is more lengthy, but the end result is aerial video footage of unrivaled quality.

12 Tips To Take Your Drone Photography To The Next Level

Should You Always Fly Your Drone With An ND Filter?