The DJI Mavic Mini has finally been announced after lots of speculation. Overall, the first impressions are great; we’re pretty impressed and can’t wait to get our hands on one and test it out in the real world. The drone has been designed to phase out the DJI Spark (Mavic Mini and DJI Spark Comparison) but we wanted to compare it with the Mavic Air to see if this cheaper-priced alternative could give the Mavic Air a run for its money.

The design of the Mavic Mini is pretty sleek and is an improvement on the original design of the Spark, which for me, was a little too shiny-looking on the plastic. The Mavic Mini It does look very similar to the Mavic Air with more of a matte finish which makes it look more expensive than the Spark.

One of the best features of the Mavic Mini is its minuscule size; it weighs about half of what the Mavic does – 249g.

DJI clearly designed this thoughtfully after new legislation was introduced for drone fliers in the UK stating they will have to register all drones weighing over 250g from November 5th onwards. The new ruling requires everyone to pay a fee and take a test that shows they can fly a drone safely and responsibly.

By purchasing the Mavic Mini, you can easily avoid this technicality and just worry about having fun flying your drone. I think the drone will be of particular interest to those who travel a lot, or visitors to the UK, because not only does the weight make it easy to transport, it saves you going to the effort of registering your drone with the CAA for the sake of flying it for a couple of weeks.

The weight also falls under the threshold for FAA guidelines in the US, who also require registration of all drones weighing more than 250g (0.55lb)

So, if you plan on flying your drone in some high altitude terrain like the 14,000 ft peaks in Colorado, mountain ranges like the Himalayas, or in high altitude towns and cities Like La Paz, Cusco, or the Andes, it’s best to purchase the Mavic Air; the extra 1000m will make all the difference.

However, if you tend to fly your drone at lower altitudes, or by the beach for example, then the Mavic Mini will suffice.

We never recommend flying drones out of your line of sight. However, if you’re in a wide-open space it’s always good fun to test the maximum capabilities of your drone.

As they use the same WIFI transmission technology, both the Mavic Air and the Mavic Mini have a range of 4km. This is still a far cry from the Mavic Pro’s impressive 7km range but is double the range of the Mavic Mini’s predecessor, the DJI Spark.

Flight time can be the make or break when it comes to purchasing drones but for the price, the Mavic Mini delivers the goods. It lasts 30 minutes which is far longer than the Mavic Air’s 21-minute flying time.

There’s a pretty big difference in the speed of the Mavic Mini compared to the Mavic Air, but since the Mavic Air is double the price we’d expect it to have a little more torque.

Both Mavic Mini and Mavic Air have the same ascend speed (4 m/s) but the speed of descent is the same – 3 m/s.

DJI chose to fit the Mavic Mini with a three-axis gimbal which is basically the same as the one that’s installed on the Mavic Air.

In the past, it has been rare to see such a high-tech gimbal for such a reasonable price but now that drone flying is becoming increasingly popular and accessible to the masses, companies like DJI can focus on improving their tech for less.

The new gimbal on the Mavic Mini will be a major selling point; it can pan, roll, and pitch, and overall it creates smooth footage of the same quality as the Mavic Air.

The Mavic Mini has the exact same camera sensor as the Mavic Air; a 1/2.3” cropped CMOS. It can take 12MP photos and has an aperture that increases all the way up to f2.8.

One of the downsides, however, is that the Mavic Mini doesn’t capture videos and photos in RAW format – just JPEG. If RAW footage is essential for you, then the Mavic Air is definitely the better option as it gives you much more flexible editing capabilities in post-production.

The ISO  on both the Mavic Mini and the Mavic Air are the same and they perform well in lower light situations. The ISO automatically adjusts depending on the conditions and is capped at 1600. For video footage, the Mavic Mini can increase its ISO up to 3200, whereas the Mavic Air has a max ISO of 1600. This does mean, however, that the Mavic Air has better image quality and less ‘noise’ in low light videos

The video quality on the Mavic Air is slightly better though, thanks to the lower ISO and higher bitrate; 100 Mbps compared to 40 Mbps on the Mavic Mini.

Mavic Air features DJI’s FlightAutonomy 2.0 system which consists of a primary gimbal camera, forward, backward, and downward dual-vision sensors, downward infrared sensing system, IMU redundancies, and a group of computing cores. Mavic Air can actually fly over or fly around an object. Mavic mini has no forward or backward sensors which means it’s unable to avoid any obstacles like trees, walls or buildings. You need to be more careful when flying inside, in cities or forests. 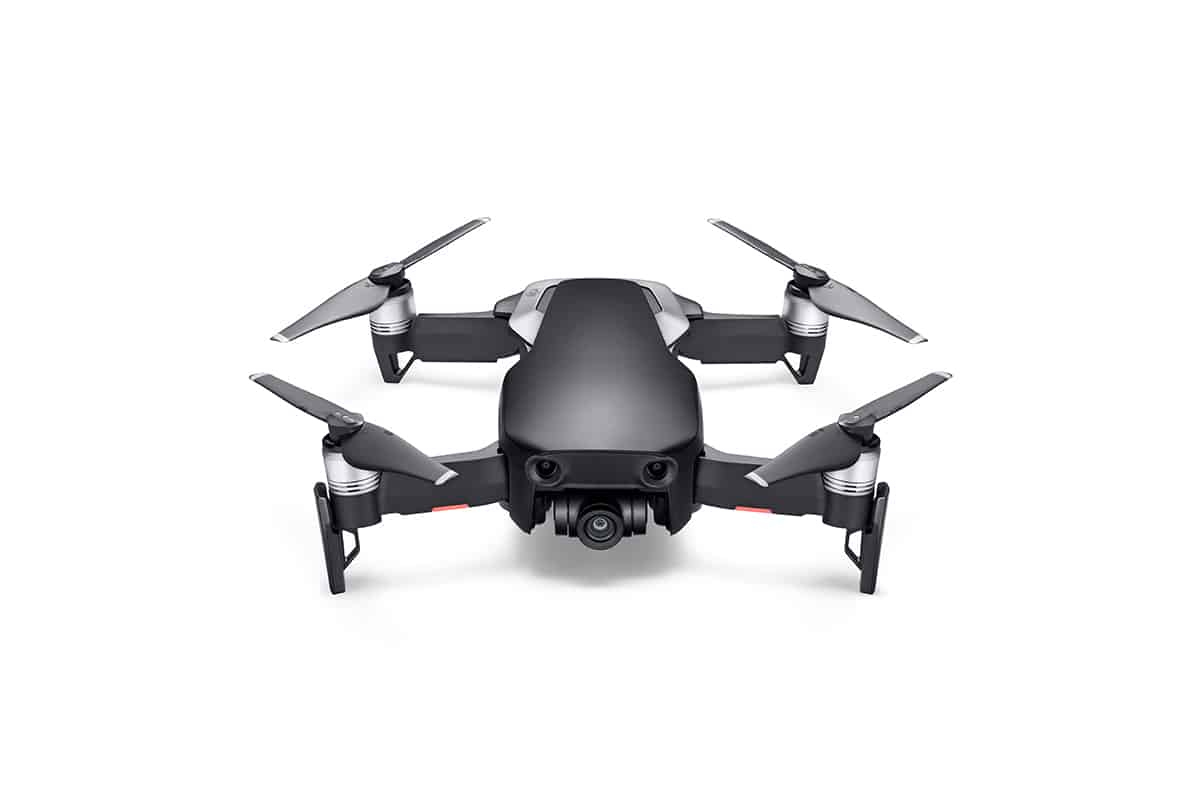 The new Mavic Mini only has downward sensors to help with positioning. That’s probably one of the main reasons why it only costs $399.

When it comes to intelligent flight mode, I think one of the main differences is the ActiveTrack which loved by many drone pilots. It enables the drone to automatically follow you wherever you go and shoot cool videos at the same time. The Active Track feature requires not only the camera but more sensors to take effect, so Mavic Mini doesn’t support it.

Mavic Mini has a new App called the DJI Fly which offers a variety of Creator Templates that generate awesome videos with just a tap. It’ more beginner-friendly and simpler to use. You don’t even to be a pro to edit your videos.

Mavic Air uses the DJI GO 4 App which has a comparatively long and steep learning curve.

In this chart, we have compiled a quick reference guide comparing the main specifications of the Mavic Mini vs. the Mavic Air:

Note: The Mavic Mini has no internal storage and doesn’t come with a micro SD card, check here to learn the best compatible sd cards for Mavic Mini.

The new Mavic Mini and the Mavic Air are, technically speaking, very similar drones and if you’re wanting to purchase a drone that’s a little bit cheaper, then hands down the Mavic Mini is likely to suit you perfectly.

It’s in the finer details that you’ll find the Mavic Air excels and it is more suited to the intermediate flyer rather than the beginner. If you want your drone to be that little bit faster, shoot 4k videos, detect and avoid objects and reach 1000m higher then go with the Mavic Air.

Just ask yourself what features you’re really going to use and decide if that’s worth the extra $400 price tag.