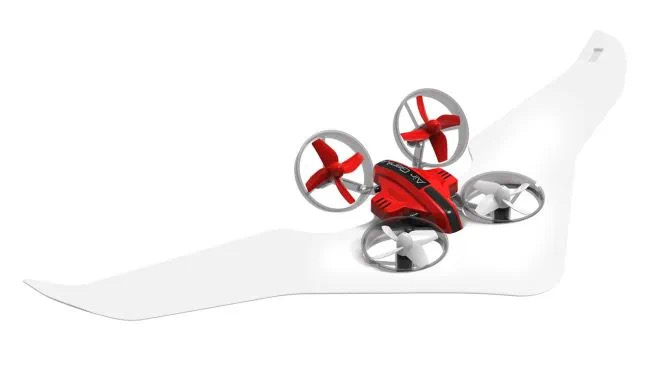 In today’s post, we will be discussing everything you need to know about the headless mode when flying a drone – don’t worry it’s not as scary as it sounds.

Headless mode can be a particularly useful feature if you’re mid-flight and are unsure which way your drone is heading. This issue tends to happen more if you’re flying a drone without a camera because you’re flying with no visual aid on your controller/screen.

Headless mode is also useful for those of you who are beginner drone pilots or complete newbs and you want to have a much easier, and more controlled flight.

So, What Exactly Is Headless Mode?

Essentially, headless mode ensures that no matter which way the drone is facing, it will always move in relation to the controller of the drone (you).

So, for example, if the front of the drone is facing north (at 0 degrees) but you and the controller are facing west (at 270 degrees) and you press forward, the drone will head west (or forward in relation to you).

Headless mode is becoming an increasingly popular feature on quadcopters, especially those tailored to kids because it’s much easier to operate this way when you’re first starting out.

Which Drones Have a Headless Mode Feature?

Most entry-level and toy drones will have a headless mode feature. Some examples include the MJX Bugs 2W and the Syma X5SC.

More expensive entry-level drones like the DJI Mavic Mini, don’t currently have a headless mode feature, however, the Mavic Pro, for example, does have it. They are referred to as Home Lock and Course Lock; each of these modes can control the direction of the flight and can be used mid-flight. Here’s what they do:

The Course Lock is more of a dynamic version of headless flight mode. It will lock the drone’s current nose direction as forward regardless of its current position. For example, your drone could be facing west (270 degrees) and if you activate the course lock, 270 would now technically be seen as the forward direction (0 degrees).

How to Activate Headless Mode on a Drone

With cheaper drones, you may find that headless mode needs to be activated before takeoff. Other drones, however, can be controlled mid-flight. If we take a look at the Mavic Pro as an example again, the Course Lock that this drone has is something that could only be activated during your flight because of the type of flight feature it is.

Things You Should Know When Flying a Drone in Headless Mode

Issues of Reliability – As with any intelligent flight feature, the reliability of headless mode is often discussed and questioned amongst drone enthusiasts. Thankfully, it’s actually one of the more reliable features of a drone and usually isn’t affected by things like the range and battery life, etc.

Nevertheless, it’s functionality still relies on a sensor that can be seriously affected by electromagnetic fields; think powerlines and using your drone after taking it on an aircraft.

It May Cause Formation of Bad Habits – Although the headless flying mode is great for beginners, we don’t think that you should rely on it 100% of the time. This is because it won’t allow you to develop your skills further and could cause bad habits.

If you start out with a beginners drone and then upgrade to a mid or high-end drone where headless flying isn’t a part of the features, you could find yourself in trouble while flying because you’d be used to just using forward and back controls without actually paying attention as to what direction the drone is facing.

As with any other sport/activity, your brain creates muscle memory and it could be hard to break the bad habit.

Headless Mode and FPV – There’s really little point in activating headless mode if you’re operating a drone in FPV. This is because you will be seeing your flight path from the drone’s perspective so you will always know which direction you’re heading. Nevertheless, we wanted to include this question here as it is something that we do get asked from time to time.

Who Should Buy a Drone with Headless Mode?

Take a look at any drone, whether it’s in the local shops, your own, or even a friend’s, you’ll quickly see that the physical appearance of them is usually very symmetrical and basically looks the same from all angles.

This becomes even more apparent when the drone is several feet above you in the sky meaning it can be difficult for a beginner pilot to tell which is the front and which is the back, even WITH indicator lights or stickers.

Don’t worry though, because as you become more experienced in piloting a drone, you’ll likely find that it isn’t something you need anymore and will want more control over your flight operations.

Therefore, In our opinion, if you’re completely new to flying a drone, or if you’re buying a drone as a children’s present, then we recommend purchasing a drone that has a headless flying mode.

The great news is, though, that most drones under $100 are likely to have a headless mode and, in some cases, like with the DJI Mavic Pro, a version of headless flying is included as it could be needed in more complicated flying environments.

We hope this article covered any questions you had about flying a drone in headless mode.

Remember, if you’re a beginner it’s a great way to introduce and accustom yourself to the flight controls of a drone, but it can also come in handy as an experienced pilot if you find you’ve lost track of the orientation of the drone.

If you have any questions relating to your specific drone and how to operate headless flight mode in it, just reach out. We’d be more than happy to help!

1 thought on “What is Headless Mode in Drone Flying?”