How high can you fly a drone?

This is a question that’s been on many people’s minds since they first hit the consumer market.

Though there have been reports of drones flying as high as 33000 ft, this also begs the question of how high should a drone fly?

In today’s post, we’ll be covering how high you can fly with your drone, how high you should fly, and even include some tips for flying at high altitudes.

The legal height limit for flying a drone

Can you fly a drone higher than 400ft?

What happens if you fly a drone higher than 400ft?

The Maximum height a drone can fly

Tips for flying your drone at a high altitude

The legal height limit for flying a drone

We wanted to start the article by defining the legal height limit for flying a drone.

The answer to this depends on where you’re flying.

In the US for example, the legal max altitude for flying drones is 400ft as deemed by the FAA’s Part 107 rules. According to these rules, this range is what’s known as ‘uncontrolled airspace’.

But what exactly do the part 107 rules say? Is there any leeway?

The Part 107 Rules are a set of laws specifically designed for drone pilots. So, for the purposes of this article, they’re a great standard to go by when considering the max altitude you can fly your drone at.

Under section 107.51, you’ll find all the rules surrounding operating limitations. This covers factors like speed, ensuring you’re flying within line of sight, and the maximum flight altitudes. It’s in this subsection that the FAA states that drones can’t fly more than 400ft high unless they’re within the vicinity of a structure, in which case you can fly “within 400ft of its immediate upper limit” – Sometimes. There are some exceptions to the rule when in controlled airspace which we discuss later.

For those of you who don’t think 400ft is that high, you might be pleasantly surprised. To give you an idea of what 400ft looks like from above we recommend you refer to this video.

So why does 400ft seem to be standard? At any given time, most aircraft will be flying at a minimum altitude of 500ft unless they’re coming into land or taking off at a nearby airport – in which case your drone would be in a no-fly zone. The FAA and other regulatory bodies across the globe decided to give a buffer of 100ft and set the limit at 400ft for extra safety.

If you watched the video above, 400ft is usually far more than you’ll need for any commercial or personal projects that you’ll be shooting on your drone too. If you’re shooting real estate, for example, the video shows you just how much you can get into your frame at a 400ft altitude. In some cases, it may be that 400ft is too high. Generally speaking, unless you’re needing to shoot thousands of acres of land from above, you won’t need to go higher than this limit.

Can you fly a drone higher than 400ft?

But what if you want to, or need to fly above 400 ft? Additionally, there’s a lot of different terrain across the globe. What if you live in an area that’s above 400ft in altitude? Can you still fly a drone there? Or is the rule 400ft above sea level?

You’ll be pleased to know that the 400ft rule is dynamic and represents the altitude above the level that you’re taking off at. So, whether you’re at the beach in Malibu, or climbing some 14,000ers in Colorado, you’ve still got 400ft of airspace to play with.

Legally, you can fly your drone from the top of Everest, though it’s questionable whether a recreational drone would be able to handle the conditions or not.

You can also fly a drone higher than 400ft if you apply for a Part 107 Waiver. You’ll need to create an account on Drone Zone and then prepare any supporting documentation to submit with your waiver application.

Approvals can take up to 90 days to process so do bear this in mind if you’re planning on flying your drone for something specific like a commercial project. The FAA publishes all approved waivers online, so you can see what one looks like here.

When in uncontrolled airspace, you can fly within 400ft of the top of a building, no problem. But what about when you’re not? Can you fly your drone 400ft above a Manhattan skyscraper for example? 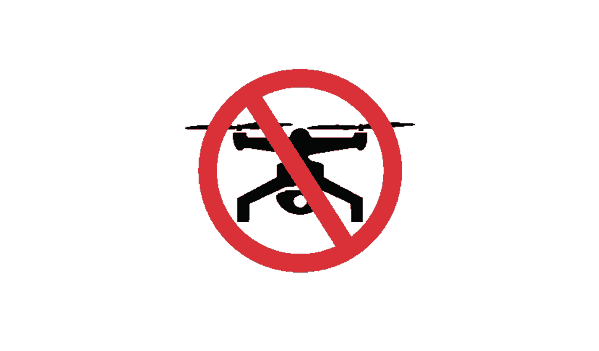 Airspace in the US and most of the world is usually categorized into different classes. This document covers all of them and at what heights they usually start and end. Most airports are in controlled airspace, but some of them are not – in which case you need to be extra diligent when flying.

When you’re flying above structures in controlled airspace the 400ft rule no longer applies, your max altitude will vary depending on what’s defined on your  LAANC authorization. On LAANC authorizations, your drone’s maximum altitude is calculated from ground level and not from the top of a structure, so if your LAANC gives you 400ft authorization, that’s from ground level and not 400ft above any surrounding buildings. This could make things difficult if you’re specifically trying to record a structure for a commercial project that’s in controlled airspace.

What happens if you fly a drone higher than 400ft?

This is a good question, as some people might want to bend the rules from time to time to get the perfect shot. However, it’s important to remember that the primary reason for the 400ft rule is safety and that’s not necessarily for you as a drone pilot, but for other people that could be passengers in various aircraft in the sky.

Sadly, near misses between drones and aircraft happen more often than you think, and although there have thankfully been no fatal incidents yet, it doesn’t take away from the fact that there is a level of risk associated with flying your drone too high.

Because of this, if you’re caught flying your drone above 400ft you could be fined and face prosecution depending on the severity of the violation just like this drone pilot in Philadelphia did. The pilot had violated the Part 107 rules no less than 26 times within a 15-month period and ultimately got fined $182,000. The pilot had conveniently published videos of the violations on YouTube which were then used by the FAA as evidence.

How can you stay within the 400ft limit?

With any luck, we’ve hopefully encouraged you to stay within the 400ft flying limit. But how can you do this easily?

We recommend you set a maximum altitude in your drone’s app. It’s simple to do and you can change it whenever. We usually set ours to 390ft to allow a bit of wiggle room. This way, you can guarantee your drone will always be below the 400ft limit and you won’t accidentally be violating rules.

The maximum height a drone can fly

Now we’ve discussed the legal limits on how high a drone can fly, let’s take a look at the technical capabilities and limits. After all, flying drones in the mountains provides for some pretty epic footage. The max height will be limited by several factors such as the weight of the drone, the way it’s built, and the propellor speed. External factors such as air pressure and weather conditions will affect the drone’s performance.

How high can a DJI drone fly?

This depends on the model. Of course, lighter drones like the DJI Mini 2 are much smaller and will therefore struggle to generate as much lift as the Phantom 4 did, for example. In the handbook for the Phantom 4, it did suggest you could fly it up to 6000m and this is the same for the Phantom 3 Professional. The Mini 2 states a max altitude of 4000m.

There was a report of a phantom 2 going from 0-11,000ft (3352m), but some speculators in the DJI forum questioned its authenticity based on the perceived flight time to get to such heights – plus the pilot would’ve broken the law in a major way.

Tips for flying your drone at a high altitude

If you are flying your drone at high altitudes, these tips should ensure a smoother experience.

Watch the battery – It’s generally colder at higher altitudes so you may find that your battery decreases much quicker, there’s a lot of discussion in forums about exactly how much battery power is lost at certain altitudes but Drone DJ suggests it’s around 10% per 6000ft, so keep that in mind if you live in an area that’s at a high elevation.

Fly in a quiet area – If the drone loses lift, you don’t want it to crash into someone and injure them.

Stay within the legal limits – these recommendations are for those who are taking off at high altitudes, we don’t recommend breaking FAA rules and flying your drone more than 400ft above the take-off point.

We hope this article has given you a little more understanding of the maximum legal altitude your drone should be flying at and how you can stay within those limits and operate your drone safely. Though we understand the urge to take your drone footage to the next level, the 400ft level is pretty high enough for now. Happy flying!