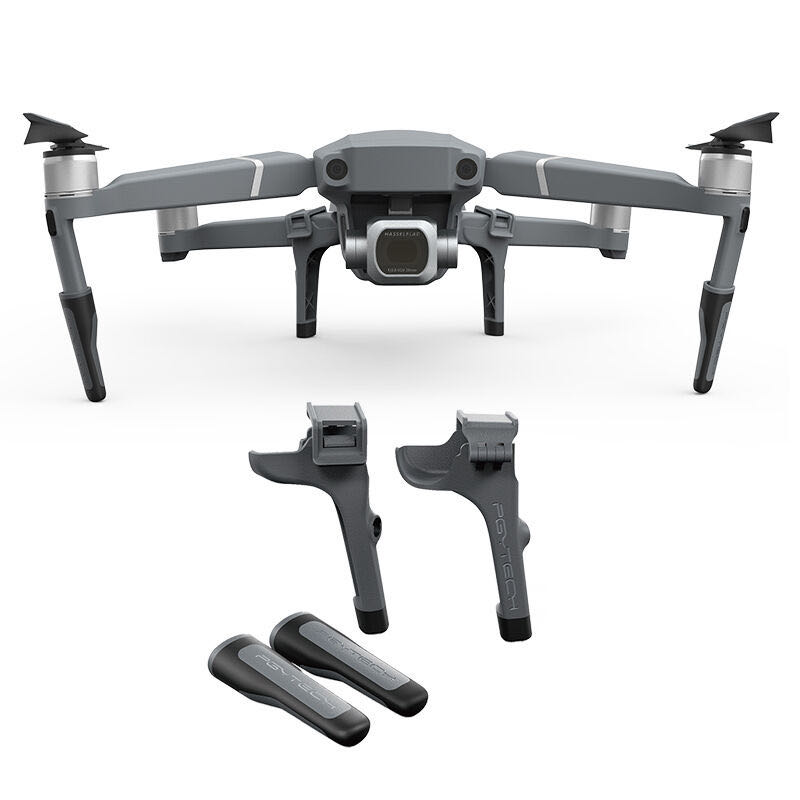 When you’re buying accessories for your Mavic 2, some additional landing gear is something that you may have overlooked initially.

However, that doesn’t make it unimportant…

Landing gear gives your drone that much needed extra clearance which helps protect low profile drones like the Mavic 2, especially if you’re taking off from uneven surfaces or long grass.

The last thing you want when you’ve paid over $1000  for a drone is to damage the delicate camera, gimbal, and even the sensors; All of which are placed underneath the Mavic 2. You may want to also invest in a landing pad, but we’ll discuss that more in-depth another time.

Today we’re going to run through the best landing gears for the Mavic 2.

Buying Guide: What to Look for When Buying Landing Gear for Your Mavic 2

The material of the landing gear is very important. You’ll either want a set made from high-quality plastic or rubber. Rubber is great because it creates suction against the arm of the drone making it really sturdy and near-impossible to fall off.

You may also want to consider the aesthetic when looking at materials. Something that matches the color of the Mavic 2 will blend in seamlessly with it and make it look like it’s part of the drone.

If you’ve seen landing gear for the Mavic 2 before, you’ll likely be familiar with the setup and how to install it. There are usually two front pieces that slide on and the back pieces clip on. However, having some instructions or just a note on the landing gear itself that tells you where to position each piece is something you should look out for.

Many landing gear options aren’t retractable meaning that each time you fly your drone, you have to put them on then take them back off before you fold the drone back up.

Well, instead, if you purchase retractable landing gear you can keep them on the drone all the time and don’t have to worry about this. All the gear we’ve featured today is retractable for this reason.

Based on the factors mentioned above, we’ve put together a list of our favorite landing gear for the Mavic 2. Let’s take a look!

Thee PGY Tech landing gear set for Mavic 2 comes well packaged and is easy to install onto your drone. The back legs have small markings on them to indicate the left and right sides though they don’t have an instruction manual – nevertheless, installation is pretty straightforward.

They are retractable, however, we’ve found that when you fold the drone they do slightly rub against the casing, and after a while, this could cause some cosmetic damage.

Another issue is that if you’ve put a wrap on your drone, then you may find you can’t make the landing gear fit. Generally, they don’t recommend the product for wrapped drones. However, some users did manage to get them on. Having said that, we probably wouldn’t recommend forcing the gear on.

They weigh just 22g which is fairly lightweight and lighter than some competitor landing gear on the market. However, there did seem to be a division of opinion amongst our testers. Some experienced drag that they were not happy with whereas others said they didn’t notice it.

The O’Woda gear is a great, affordable, retractable landing gear set that’s easy to place on the drone. You have the option to just use the back landing gear too if you just want a slight raise, but we recommend installing both the front and back for extra security.

Overall, the gear stays snug and secure on the drone and is designed very similarly to other landing gear.  With a weight of 24g, it’s slightly heavier than the PGY Tech but it still shouldn’t affect your payload too much.

Some users have complained about the rubber feet on the ends of the gear falling off on this set however and recommended adding some superglue to really secure them into place. Additionally, the plastic used doesn’t feel amazing, but for the price, it’s a great choice that does what it says on the tin. The color also blends perfectly with the Mavic 2.

Polar Pro is a popular option amongst drone flyers across the world and they provide a bunch of accessories for the Mavic 2, not just landing gear.

Their landing gear is a little more expensive, however, the quality is up there with the best.

The retractable gear doesn’t scratch the casing of the drone and is made from rubber and plastic which gives the equipment a strong grip. It’s also very easy to install thanks to the small white circles indicating which leg to place the extension on and it comes with an instruction manual if you need more guidance.

Weighing in at 24g they’ve managed to keep it lightweight yet durable and, although it is all black it still blends in fairly well with the Mavic 2 design.

The only slight fault with it is that you have to press quite firmly to fold the legs which could mean you’re putting too much pressure on the arms of the drone and this may put some drone pilots off buying this landing gear.

The Verdict: What’s the Best Landing Gear for the Mavic 2?

Although the PGY Tech and the O’Woda sets offer great affordable options, I think, that from a quality standpoint, the best landing gear for the Mavic 2 is the Polar Pro. It’s stylish, is made from high-quality materials and can just be attached to the drone and left there without damaging the casing. It ticks all the boxes for us.

What are your thoughts on the landing gear we featured today? Did you buy one of the ones we listed, or do you have something else in mind? Let us know below!