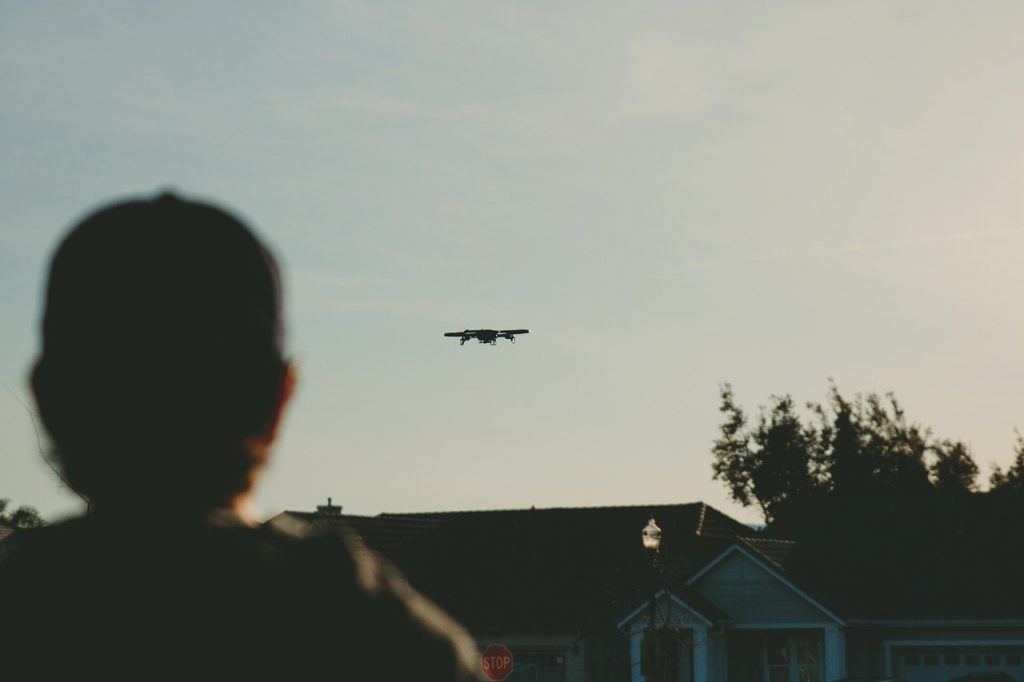 Flying drones can be a fun hobby, and used in the right circumstances, they can create great footage and capture awesome images.

But what happens when a drone becomes a nuisance?

Do you have a drone consistently flying over your home and you don’t know what to do about it?

In today’s post we’ll be covering some of the most common questions we get asked regarding drones flying over your house and what measures you can take to stop it.

The drone laws in the United States are still a little ‘gray’ when it comes to flying over properties and what’s defined as someone’s land. Old British common law used to state that an owner had everything above and below their land. So, if your neighbor were to fly their drone above their property, they’d be in their right to do so.

However, due to changing times, the FAA had to step in and create new regulations to help protect people and the aircraft in our skies. Nevertheless, the new legislation doesn’t tend to cover smaller UAVs that are being used for recreational flying which most of the time is what you’ll find your neighbor will be doing.

However, moving forward, state and federal laws are set to change and in some places, they already have provisions in place that cover drone flying. In Florida, you can’t surveil people with drones if it’s deemed that their reasonable expectation of privacy has been violated. And, in California, you can record someone on your drone without their consent.

FAQs about drones flying over your house

So, what do you do if you think someone is recording you? Do you have rights? How can you prove it? Here are some of the most common questions we get asked about drones flying over houses our recommended solutions.

How can you tell if a drone is spying on you?

This can be a tricky one to answer. Interestingly, researchers at a university in Israel developed a proof of concept method of finding this out using radio signals, though it’s questionable how legal doing this in the real world would be.

But usually, it takes a bit of common sense and a gut feeling to decipher if a drone is spying. The general rule is that if a drone is hovering above your home within treetop level on a regular basis then it’s grounds for accusation of spying.

Because drones are equipped with such high-tech cameras,  there is the possibility that when they’re flown at this level, if you’re sat in the garden or have your curtains open, the drone will be able to catch what you’re doing.

This, of course, has become a huge cause for concern for many states which is why we’re seeing a lot of legislation reviewed and changed.

Can a neighbor fly a drone over my house?

The short answer is yes.

The FAA now controls all the airspace directly above your home. However, what’s interesting is that anything that’s under 400ft is considered uncontrolled airspace, so your neighbor can legally fly their drone over your house as long as they’re below 400ft and not breaking any privacy laws by hovering below the treetops.

Why is a drone hovering over my home?

If it is, in most cases, it’s likely just a neighbor playing with their new toy in the garden so it’s always worth having a chat with them. You’ll quickly be able to establish why they’re flying their drone over your house. You can voice any concerns and ask them to stop if you feel like your privacy is being invaded.  Chances are that they likely didn’t realize they were causing any distress.

Generally speaking, we don’t believe that drones are an invasion of privacy when they’re used as they should. Nevertheless, we appreciate there’s a lot of concerns surrounding drone misuse, and sadly sometimes, drones can be used to spy on people.

Do I own the airspace above my house?

Not anymore. The airspace above your house belongs to the FAA. However, anything under 400ft is considered to be ‘uncontrolled airspace’ making it a bit of a ‘free for all’ zone for drones.

Can drones see through your house?

This depends on the type of drone. Most recreational drones can’t and even if they have a camera, they’d have to be clearly positioned in front of a window to see through into your house at which point, the owner of the drone would be in direct violation of privacy laws.

Some higher-tech commercial grade or military drones may be able to see through your house with thermal imaging technology. But it would be very rare for your neighbor to have something like this and would be breaking privacy laws if they were using it to spy on you.

Is it illegal to take down a drone?

Yes. Currently, the FAA treats drones the same as normal, commercial or private aircraft. Therefore, according to the Aircraft Sabotage Act, if you take down a drone you’re breaking federal law and could face jail time of up to 20 years. Additionally, if you threaten a drone or a drone owner, you’d also be committing a federal crime and could face up to five years in prison.

As well as this, depending on the county and state you live in, the use of firearms could be considered what’s called ‘criminal mischief’. Self-defense won’t be considered a good enough excuse for taking down a drone.

If you take down a drone, not only do you face federal lawsuits, you could also face a myriad of civil suits too due to the destruction of property.

Jamming a drone’s signal is also prohibited by federal law.

Can I throw a rock at a drone?

No. Drones are sensitive pieces of equipment and it doesn’t take a lot to down one. So, if you do hit it you could be charged under the Aircraft Sabotage Act. In addition to this, if you miss, you’re also at risk of doing damage to something else such as a person or your neighbors’ property which could result in legal action where you’d have to pay damages.

What is the penalty for shooting down a drone?

Can a laser pointer take down a drone?

This depends on the strength of the laser pointer and how far away it is.

A powerful laser pointer could interfere with communications between the drone and its controller and cause it to drop out of the sky. It could also cause structural damage in the air too.

However, you should never point a laser at a drone as the penalties are the same as they would be if you were to point one at a regular, commercial aircraft.

Can law enforcement shoot down a drone?

What to do if a drone is spying on you

What to do if a drone lands on your grounds/property

What to do if a drone is over your house

If a drone is flying over your property the drone pilot isn’t actually breaking any laws unless they’re very obviously using their drone to spy on you and frankly, most recreational fliers aren’t flying their drone with that intention.

Nevertheless, this doesn’t mean you should drop the situation completely. Especially if it’s bugging you.

Our number one piece of advice is to politely talk to your neighbor and ask if they can stop flying the drone overhead.

If this doesn’t work you can reach out to your local homeowner’s association to see if there are any local restrictions regarding flying drones over houses.

Next up, you can consider taking a look at your official property boundaries. If the drone flies within the specific boundaries at a low altitude, it could be considered trespassing and if you have photo evidence you can file a complaint with the local authorities.

If things are continuously getting worse you can allege that the drone operator is causing a nuisance or is invading privacy. In such cases, if the court rules in your favor, you may be able to get an injunction against the drone owner preventing them from flying their drone over your house in the future.

Thankfully, most issues are resolved before things get to this point as most people are simply unaware that they’re causing distress.

We hope this guide has helped you with all the questions you might have surrounding drones and their legal right to be flown above your home. If you have any more questions reach out below and we’ll update the article.